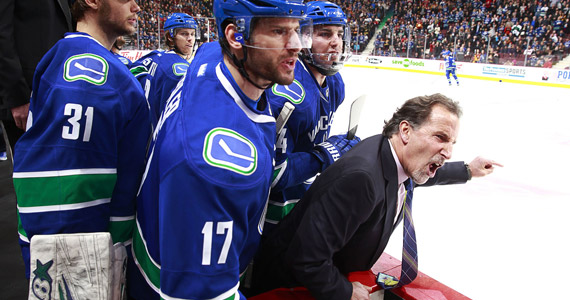 Well that was one way to relax a slumping Canucks lineup. In the 3rd game of Hockey Day in Canada, the Canucks and Flames went to the 5th round of a shootout before the Canucks prevailed. The game featured a line brawl off the opening face off.

24 year old Kellan Lain was playing his first NHL game on Saturday night. Most of his family flew into Vancouver and were watching, when he played for 2 seconds. He was then penalized 5 minutes for fighting, and a game misconduct as part of a massive line brawl that erupted, resulting in over 150 penalty minutes. The previous record for the fastest fight to start an NHL career was 12 seconds, set by John Ferguson, over 50 years ago. Clearly the teams didn’t read my blog post about fighting in the NHL.

There were many subtleties about the game even before the puck was dropped. In an NHL game, the road team submits their starting lineup first; the home team can then review that and submit their own starting lineup. Calgary’s starting 5 was: Kevin Westgarth, Blair Jones, Brian McGrattan, Chris Butler, and Ladislav Smid. Without their goaltender, that’s a combined weight of 1097 pounds. John Tortorella naturally responded by starting his 4th line. All hell broke loose after that. According to The Code, McGrattan had to answer the bell for injuring Andrew Alberts in the previous game between these teams. He is now square with the house as he shed enough blood that they needed to give him a new jersey and scrape the ice to clean the blood off.

And Then It Got Weird

At the start of the first intermission, Tortorella decided to go all Ghost Ops and storm the Flames dressing room. At the start of the season I was not a fan of Tortorella but I’ve become a big fan of his intensity, and how honest he is with the players and media. But this is just bush league. This happened after the 1st period, which took about one hour to play. Plenty of time to mull it over and think about things like a rational human being. The best part of this has to be that tough guy McGratton has to hold back Torts and Flames assistant coach Clint Malarchuk. Cooler heads prevailed, but Coach Tortorella will most definitely be disciplined by the league for this mess. The whole situation is an embarrassment for the NHL and hockey as a whole.

So what does it all mean?

For all the moral victories, blocked shots, fights and bloodshed, the Canucks record in the last 10 games is 2-5-3. It’s all a wonderful distraction from the fact that the Canucks needed 5 rounds of the shootout to beat the slumping Calgary Flames. Yes – the Flames have been playing even worse than they normally play. Previous to this win, they had scored a total of 1 goal in their last 3 games.

First prize is the Stanley Cup, no one cares who comes  in 2nd place. We can only hope that the Canucks can get into the playoffs and get hot at the right time. If the team wants to go deep into the playoffs, they will have to remember the lessons they’ve learned at this point of the season.