This series of blog posts will look back on the highest highs of last season, and looks to get the Canucks faithful amped for the season to come!

Many Canucks fans are still stinging from the Game 7 loss in the Stanley Cup Final, but along the way to the final, there were a number of memorable moments and games. Ask fans what their favourite moment was, and chances are they will tell you about Alexandre Burrows OT winner in Game 7 against the Blackhawks, or maybe Ryan Kesler splitting the Nashville defence to score.

Today’s memory isn’t a series winner, or a first ever goal, and it didn’t happen in OT – but it was still very important. On May 22, 2011, Sami Salo had a clutch game to give his team a 3-1 series lead.

Sami Salo’s 2010-2011 season didn’t start off very well. As usual, Salo’s latest injury was bizarre, and kept him from joining the Canucks at the start of the season. He suffered an Achilles’ injury playing floorball in Finland and would be out indefinitely.

Here’s an image to indicate exactly how crazy Salo’s time on the injured reserve has been (image courtesy of @NucksMisconduct): 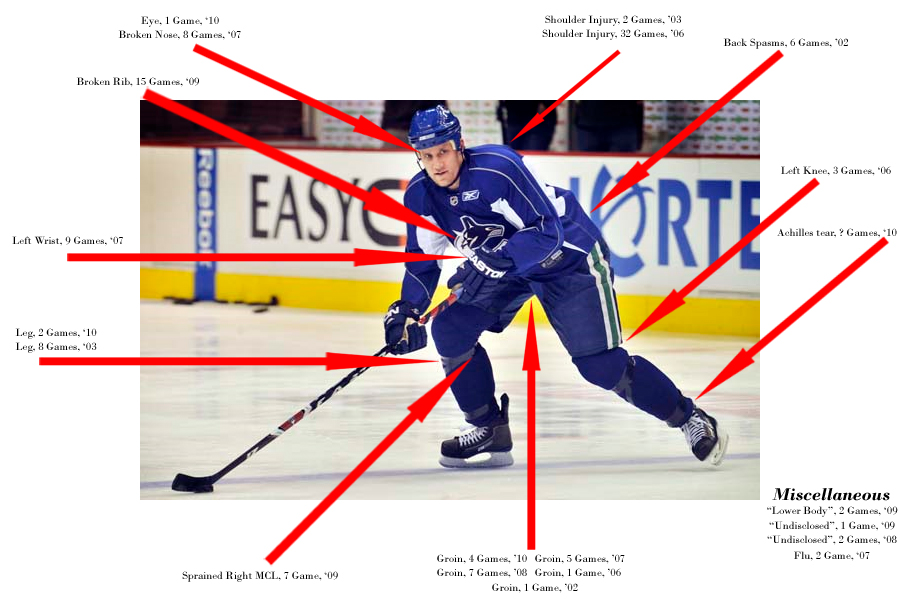 Salo did not start playing until half-way through February, and he had a slow start. The playoffs came, and he played 6 games against the Blackhawks, and only 3 against the Predators.

Then came Game 4 against the Sharks. The Canucks had a 2-1 series lead heading into the game. Lose and they would be tied heading back to Vancouver. Win and they would hold a 3-1 stranglehold on the series.

Salo can play in any situation. He’s a dependable defender that can kill penalties, but he also has a heavy slapshot that can blow by goaltenders on the power play.

In a 2-minute span in the middle of the 2nd period, the Sharks ran into penalty trouble. The Canucks opened the scoring when Salo passes quickly around to the left boards for Ryan Kesler, who beat Antti Niemi with a hard slapshot.

Shortly after that, on another 2-man advantage, Salo hammers one by Niemi from the point.

And just 16 seconds after that goal, again on a 2-man advantage, Salo shows a slightly different look skating in from the point to fire a slapshot from high on the left face-off circle.

As if the first two goals weren’t shot hard enough, Salo really stepped into that one. The Canucks won that game 4-2, and went back to Vancouver with momentum back in their favour.

Sure the Canucks were on 5-on-3 powerplays for all of those goals, but it was nice to see the Canucks finally take advantage of those chances and score.

Hockey fans all around the NHL make fun of Salo’s injuries, but most fans wouldn’t mind having that heavy of a shot on their own team’s power play.