This is it fans! The Vancouver Canucks begin their 41st season tomorrow October 6 when the Pittsburgh Penguins come to Rogers Arena.

Over the last month this series of posts has looked at a handful of the moments that made last season so awesome, and some of the players that made it happen. 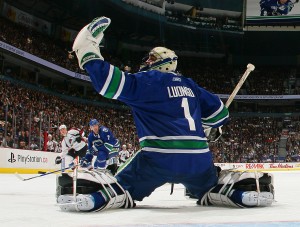 Today’s blog post focuses on #1 in your program, Roberto Luongo – the best goaltender the Canucks have ever had.

You may have some doubts about this statement, people either love Luongo or want to trade him. There really isn’t much grey area on the topic. Every goal scored against him, you can guarantee that someone on Twitter will tell you he should have had that one.

Don’t think he has been the Canucks best goaltender in history? Here’s a chart of some of the most relevant Canucks starting goaltenders and their statistics in their best seasons:

You can argue that the Canucks have had the best defence they’ve ever had, which explains the wins that Luongo has been able to post, and maybe the Goals Against Average (GAA). But Luongo has posted numbers like these in every single season he has played in Vancouver. The goaltenders listed above had far worse averages over the course of their Canucks tenure.

Luongo started off last season slowly, but by late-November he was back to sparkling form. Around the All-Star break, Hockey Night in Canada, CBCSports.ca and the NHLPA ran a poll among players. Luongo was voted by NHL players as the Goalie Most Difficult to Score On.

The Luongo-Haters out there will say he’s not a big game stopper. He chokes. He cries. Then he chokes on his tears. I am going to present you with some evidence to the contrary.

Remember when Team Canada won the Gold Medal in the 2010 Olympics? Canada would not have been in the Gold Medal final without Luongo shutting the door on his old Canucks teammate Pavol Demitra (R.I.P. Pavol).

Then there was the stop against Patrick Sharp in overtime, in Round 1 Game 7, prior to Alexandre Burrows scoring the game winner.

Still don’t believe Luongo can make a big save? Here are some more that you have to see to believe.

I will admit Luongo showed a touch of inconsistency in last year’s Stanley Cup Final (just a touch) – but I would also say to you that the Canucks would not have made it to Game 7 without Luongo. For those with a short memory, he shut out the Bruins twice in that series. As if you’ve never had a bad day at work. Show him some love, people!

Thanks for following this series of posts – I hope that all the Canucks fans are excited for this season. Here’s to looking back on the best Canucks season ever, and even better times this year!