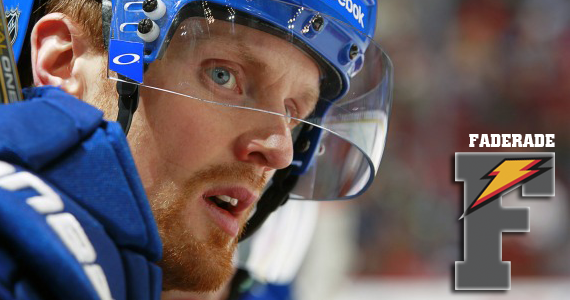 Haterade. It’s what everyone outside of BC drinks when the Vancouver Canucks come up in conversation. The sports beverage of choice for chirping and trolling in Calgary, Toronto, Boston and Chicago, among others.

Faderade. It’s what the Canucks are drinking this post season.

There’s no other explanation for their performance in the playoffs this year. All the way up and down the roster, with perhaps the exception of the goaltending, the Canucks have been underachieving. The Canucks were picked by many to have a good chance to go deep in this year’s Stanley Cup playoffs. Many had picked the Canucks to meet the Penguins in the final, and now both teams are facing a 3-game deficit.

Defensive coverage has been indefensible. #PunIntended

Alex Edler, who led the Canucks in points from the defense, has been nothing short of abysmal. In fact the entire Canucks defense corps in Games 1 and 2 of this series was suspect. Shot blocking techniques aside, if you play defense in the NHL and you find yourself diving to reach for pucks, there is a good chance you are out of position. If you are trying to play goaltender as a defenseman, even though you have one of the best goaltending tandems in the NHL, chances are you are out of position.

If the Canucks are going to win, they will need the type of coverage we saw in Game 3.

Offensive production has been offensive. #PunIntended

The basic objective of the game of hockey is to score more goals than your opponent. The team that scores the most goals wins the game. As such you need to score in order to win.

Yes, having Daniel Sedin on the sidelines has not made it easier for the Canucks. He was the Canucks leading scorer during the regular season. However, the Canucks are built for depth. When one player is out, others have always stepped up in the past. Henrik, Kesler, Higgins, Booth, Raymond, Burrows – these guys are all capable of putting the puck in the net. Kings goaltender Jonathan Quick has been very good, but he hasn’t been required to be spectacular yet.

The Canucks have all the tools they need to win. They’ve beaten the Kings before, without Daniel Sedin. They have usually adjusted well after losses, and come back with good effort. This year’s playoffs seem to be different. You could see it in the player’s post game interviews – frustration, with a touch of disappointment.

If the Canucks and their fans need inspiration to stay positive, confident and motivated, they need to look no further than their captain, Henrik Sedin.

Henrik was rocked by a hit from the Kings captain Dustin Brown, right in front of the Canucks bench. Brown had a line on him from well below the blue line; not at full speed, but from a long distance. The hit wasn’t dirty per se, but Henrik had a hard time getting onto the bench. After gathering himself, Henrik left for the dressing room.

Minutes later, Henrik was taking his regular shift. Later in the game, he had an amazing shift on a Canucks power play that lasted for well over 3 minutes, and did everything except put the puck in the net.

That is the type of effort that will lead the Canucks to a win in Game 4.

That is the Heart of a Canuck.

Do the Canucks need some magic?
And The Beats Go On in the NHL