What did he say – Hockey’s hilarious innuendo

What did he say – Hockey’s hilarious innuendo 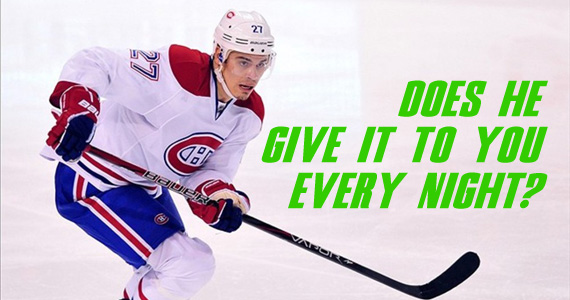 A double entendre is a figure of speech in which a spoken phrase is devised to be understood in either of two ways. Often the first (more obvious) meaning is straightforward, while the second meaning is less so: often risqué or ironic.

When describing hockey, players use shoot, hit, check, bump, slide, and use sticks of varying lengths. This makes for some often hilarious commentary. I’ve compiled just a few of the funniest bits I’ve heard throughout the season. Enjoy, and if you remember any others, write them down in the comments!

The big question regarding Bourque is this:
Does he give it to you every night?

– Brad May re: Bourque/Camalleri Trade

Couldn’t get it up, if he had, it would have been in!

Jamie couldn’t believe how SMALL it was.

Kesler, trying to send it in deeper for Raymond…

– John Shorthouse during Canucks versus Avalanche

Just waiting for the swelling to go down.

– Andi Petrillo on HNIC re: injury status of a player

I like it a little rougher than Ron does.

Him and Bieksa, they give it to me all the time.

He’ll take his time before sliding it gently in…

– John Shorthouse re: Bieksa sending the puck in for a line change.

Semin outwaits Budaj, as he opens up his legs,
slides it through the wickets.

I’m sure a lot of guys could do me.

Schneider and I been working on those tips, he likes it when
I get right in front there and change the direction.

– Andrew Ebbett re: deflecting the puck

Canucks Wagonwatch: Game 76 vs Kings
Do the Canucks need some magic?