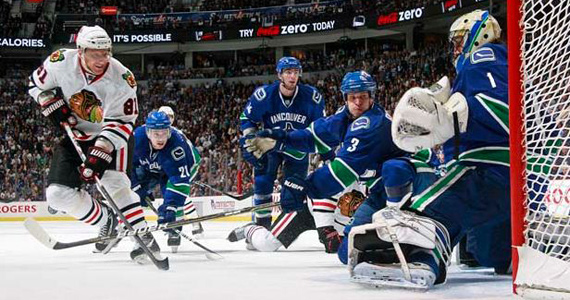 One of the NHL’s Best Rivalries: On Tuesday the Canucks are in Chicago to take on the Hawks.

When the calendar for the lockout-shortened season was released, Canucks fans immediately circled games of interest. No matter which other teams you love to see (or love to hate), almost all Canucks fans take note of every date against the Chicago Blackhawks.

Playoff series generally build excellent rivalries. Three years of playoffs in a row against the same team – with a team from that series going to the Stanley Cup Final for two years. That is huge, with wounds that are deep for both opponents. There have been numerous moments for both teams over the last few years that have helped to define this as one the most heated rivalries in the league. It doesn’t matter if it was Willie Mitchell knocking out Jonathan Toews, or Toews forcing overtime in Game 7, or Burrows “slaying the dragon”, or Duncan Keith laying out Daniel Sedin, or Luongo getting Chelsea Daggered in the playoffs, or Canucks fans feeling jealous after watching the Hawks roll to the conference finals and then the cup finals – all of the moments seem larger than life. It’s not difficult for the players and the fans to get up for this one.

With at least a point in the game against the Canucks, the Hawks would tie the NHL record for longest streak without a regulation loss to start a season. The Blackhawks are the cream of the NHL so far – unbeaten in regulation time, their record is a sparkling 12-0-3, and their goal differential is tops in the league at +20.

The current record is held by the 2006-07 Anaheim Ducks at 12-0-4. They went on that year to win the Stanley Cup, beating the Canucks along the way. The 2nd longest streak was the 1984-85 Edmonton Oilers, who also won the cup that year.

Fans in Chicago are among the loudest and proudest in the league. They cheer the anthem, they get up for every single game, and they know their stuff. I am happy to know and follow many Hawks fans on Twitter, and as in any hockey rivalry there’s some chirping, but there’s a great deal of mutual respect.

By all accounts for fans of both teams, the last game these two played against each other was dull and drab – a 2-1 shootout victory for the Canucks at Rogers Arena. The first meeting after the infamous Keith elbow to Sedin, and it was tame. Perhaps these two teams were hesitant to get into it – no player wanted to cost their team any precious points by being overly emotional.

But make no mistake – there’s still bad blood. The fans are overdue for a good game between these two teams. How sweet would it be for the Canucks to deny the Hawks that record, and steal 2 points in the Madhouse on Madison?

Canucks Wagonwatch: Game 9 vs Oilers
NHL History Will Be Made: Right Now